Cognetivity Neurosciences has been awarded a £907,500 grant by Innovate UK to trials its cognitive assessment technology for dementia in clinical settings.

Cognetivity, whose chief executive will be speaking at Rewired, will use the money to fund a 12-month project to determine whether its machine learning-driven integrated cognitive assessment (ICA) tool can outperform existing techniques in dementia pathways.

Called ADEPT (Accelerating Dementia Pathway Technology), the project aims to demonstrate the health economic benefits of the ICA and develop the technical features required to embed Cognetivity’s technology into practice.

The project will be run in partnership with Alzheimer’s Research UK and Sussex Partnership NHS Foundation Trust.

Dr Naji Tabet, who founded Sussex’s dementia research unit in 2007 and will be ADEPT’s clinical lead, described the project as “a wonderful opportunity to trial cutting edge cognitive assessment technology in a leading clinical environment.”

Dr Carol Routledge, director of research at Alzheimer’s Research UK, added: “The integrated cognitive assessment is a fantastic diagnostic aid that, used alongside other diagnostic tests, has the potential to change the way we assess someone’s thinking skills.”

An estimated 850,000 people in the UK live with dementia, with the figure expected to rise to over one million by 2025.

Figures from Cognetivity put the global estimated cost of the condition at US $1 trillion (£776bn).

Since attempts to treat dementia remain unsuccessful, an emphasis has been placed on prevention of the disorder through early diagnosis – an unmet need in healthcare systems that Cognetivity hopes to fulfil.

Its assessment tool is designed to detect cognitive decline in its ultra-early stages, potentially detecting dementia and related conditions up to 15 years before a formal diagnosis.

The five-minute iPad test is designed to be administered as part of a patient’s annual health check-up, much as a GP would perform a blood pressure test.

Chief executive of Cognetivity, Sina Habibi, said: “We are extremely pleased to receive this major and highly sought-after grant.

“It recognises the quality of our technology and its significance in solving the problem of early and effective dementia detection. The success of our project would be fantastic news for Cognetivity, but also for the NHS and hundreds of thousands of patients worldwide.”

Habibi is due to be a speaker at Digital Health Rewired 2020 and will be speaking about talking about how Cognetivity have harnessed digital to benefit patients.

Held at London Olympia on 3-4 March, Rewired 2020 is focused on connecting everyone working on health IT with the very best in innovative and disruptive digital health. 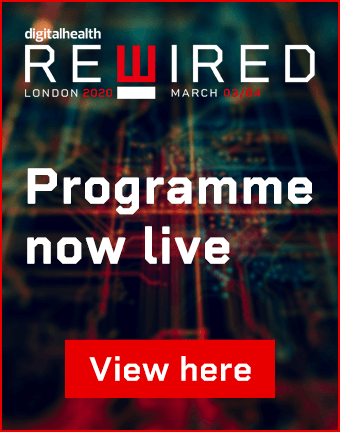